You are here: Home : English

South Evaluation of the RORG-Network in Norway
- A View from the South on Development Education in the North
09.15.2003
| Go back | printer friendly | 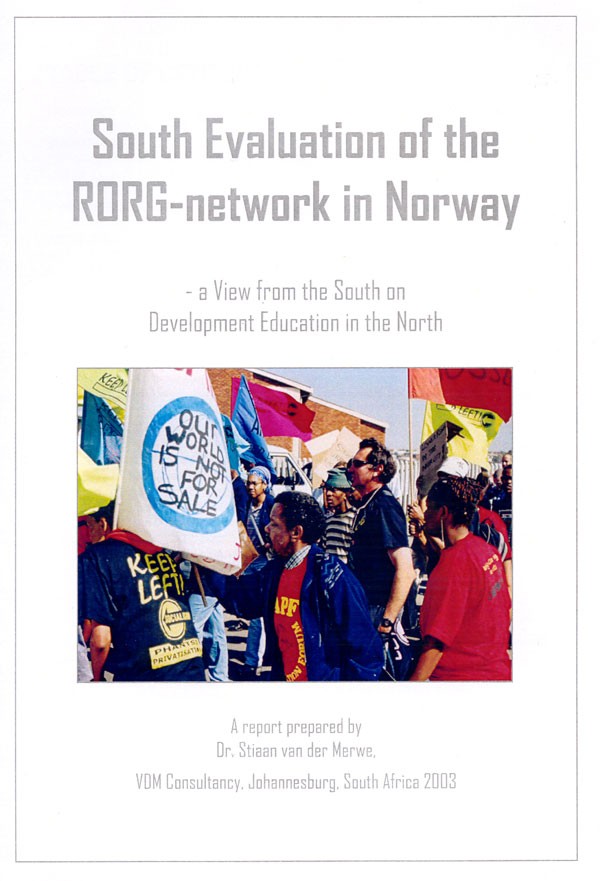 An evaluation of the RORG-Network from a southern perspectiv was carried out in 2002/2003, co-ordinated by Dr. Stiaan van der Merwe, South Africa. Below you´ll find the summary of the report, while the full report can be downloaded in pdf-format here: South Evaluation of the RORG-network in Norway, - a View from the South on Development Education in the North

If you have comments or questions regarding the report and the evaluation, please e-mail either:

The novelty of the approach,as well as the novelty of having to conduct a project of this nature in uncharted waters,applied their own pressures on the process. However,the process has opened up and even created new horizons of insight and knowledge in the field of DE. The process was not spared the fundamental tensions between North and South to the extent that the process could have derailed at any given point in time. This tension should be read as an underlying theme of both the process and content of the evaluation project.

Terminologically the following distinctions were developed:

The decision to be evaluated from the South was motivated by the notion that the South is the primary stakeholder of DE in the North. Therefore,the South should be enabled to do this primary external stakeholder evaluation,rather than a northern,external evaluation.The historical backdrop in Norway for the decision to go this route has been a struggle in and around the RORG-network to be proactive in owning the DE agenda and to broaden and deepen the agenda towards greater ef .cacy of DE in Norway. This position has been aimed at countering the dominant approach by aid-and relief organisations whereby DE is seen as informing the public and donors on their own aid efforts often linked to fund-raising.

Three issues were requested for assessment:

A two-pronged process was followed:

1) A process dealing with the RORG-network and its member organisations consisting of:

2) A concurrent process to solicit as broad as possible inputs from the South,consisting of:

A tremendous volume of energy and resources go into the DE work in Norway and massive amount of information is ‘pumped out ’and released to the public or certain target groups in a rich variety of ways.Sophisticated and extensive channels for communication have been established.

There is limited capacity designed and allocated to DE in the respective RORGs,which appeared to reflect a limited understanding and priority of DE within the RORG-network as a whole and in the different organisations.

There is a lack of clarity among the RORGs on the concept of DE and a fading organisational memory on the history of DE in Norway. The differences on the understanding of DE are functioning as a weakness in the RORG-network, reflecting diffusion and disagreement rather than complimentarity. The lack of conceptual clarity raises questions on the efficacy of the DE work carried out by the RORGs.

Serious deficiencies and challenges related to strategic thinking and strategic management led to a position whereby the overall efficacy of DE work by the RORGs has to be questioned, with particular reference to the overall benefits for the South. These include: fundamental critical contextual analysis and selfunderstanding,vision,mission,overall planning and cooperation, specific measures towards strategic planning and continuous strategic management and situational evaluation given the ongoing challenges and changes in the development dynamics in Norway and internationally.Also the lack of clear re .ection on a practice of a comprehensive pedagogy for DE in the North played a role in this assessement.Mention has been made of giving consideration to developing a pedagogy for the powerful and rich societies or a pedagogy of true solidarity as the other side of the coin of an empowering pedagogy for the poor. The aim is to ensure that true popular enlightenment takes place (folkeopplysning)affecting attitudes, behaviour, policy as well as social and organizational structures and systems. Given the political, economic, technological and moral devide that exists between North and South DE should therefore inform but also challenge society, organizations and individuals towards fundamental choices. If not, it could be seen as popular deception and blindfolding ("folkeforblinding ").

In mitigation it has to be stated that the impression exists that the RORGs are not the only organizations or DE actors of which this could or should be said. Similar trends are anticipated in organizations outside the RORG network and also outside Norway. Also most encouraging and even courageous developments have been noted whereby the RORGs are willing to take voluntary and proactive steps to turn this situation around.

The RORG-network is commended for taking this novel route for a northern NGO-network working with DE,for the way it facilitated the evaluation and for the courage to respond responsibly and courageously to comments, criticism, advice and recommendations. With all the problems encountered in one of the .rst ever of its kind evaluation, the RORG-network has set standards and poses challenges to other development related organizations in the North.

Interaction with the South

There was a lack of knowledge (at the start of the evaluation process)of the MDGs among the RORGs, despite the fact that the Norwegian government had clearly stated that their South policy is based on the MDGs and also despite continous information to the RORGs on the MDGs from the RORG-secretariat.

South input to the evaluation and the MDGs

The evaluation process has indicated that DE in the North is largely unknown to role players in the South.Furthermote,there is reason for concern about the levels of criticism and even suspicion on the project of DE in the North among NGOs and networks in the South,when confronted with it. The evaluation process has shown that:the MDGs are generally regarded with sceptisism; it is also seen by some as a continuation of northern dominance, there is a clear clear lack of enthusiasm in the South about the MDGs.

A set of recommendations are made,aimed at developing processes and mechanisms within the RORG-network towards improvement of the overall efficacy of its DE work. It is recommended that this process need to be done through adequd beyond,including role players from the South. Also, clear programmes need to be developed to deal with the MDGs in a more structured manner. Finally, it is recommended that the RORG-network consider having a next South evaluation in 3-4 year time, building on the lessons learnt during this evaluation and dealing with the developments emanating from it.

This site is supported by fra Norad. Site Developed by Noop.